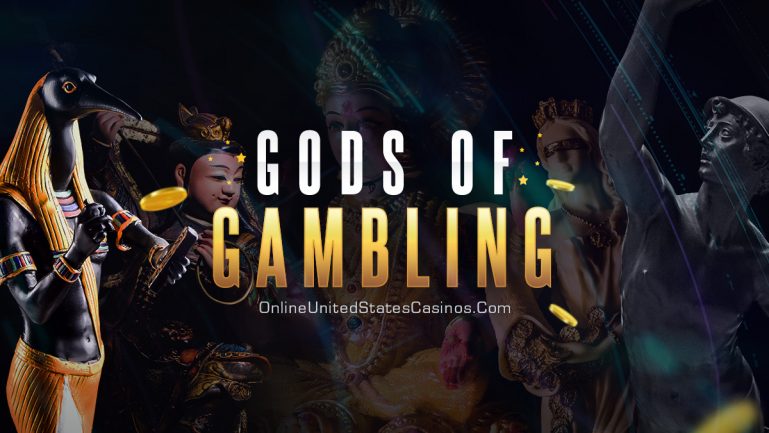 Gambling has been around as long as there have been humans with possessions to stake. With games of chance came the unseen, and people around the world turned to powerful gods to ask for celestial help.

The real question is, do gambling gods bring good luck? You may think so when you’re on a lucky streak. To this day, some people seek out ancient deities for good favor. Keep reading to learn more about these revered figures and where you can play mythology slots online.

Gods of Gambling Around the World

Almost every culture has had a holy power presiding over wagers and fortune. Learn about some of the most famous gambling gods below.

It’s only fitting that the word fortune derives from an ancient deity. The people of Rome have Fortuna, the goddess of luck. She remained a popular figure for quite a few centuries.

She is often depicted inside a wheel of fortune and blindfolded because the Romans knew that luck is blind.

The Greeks had a version of Fortuna named Tyche. Being the gamblers they were, ancient Greeks also had Hermes, the clever messenger who was said to have invented dice. Romans called him Mercury.

Hermes was one of the sons of Zeus, who became ruler of the Greek Gods by a roll of dice.

In Ancient Egypt, Thoth was the deity in charge of many things, including gambling. Those familiar with hieroglyphics will recognize Thoth, portrayed with the head of an ibis and the body of a man.

The early Egyptians would toss sticks and pebbles to determine fate, which is said to be a precursor to gambling.

In Indian culture, Lakshmi is a powerful figure, being the eternal consort to Vishnu, the most revered of the Hindu gods. Every year, worshippers celebrate her as the symbol of good fortune.

After the celebration, many believers will gamble with the hope of blessings from Lakshmi.

Macuilxochitl also called Xōchipilli, or the Flower Prince was the Aztec god of games, song, art, flowers, and dance. He was one of the five main deities of indulgence and excess in this pre-Columbian culture, the Ahuiateteo.

People prayed to him before engaging in any risk of fortune and believed he could punish them if they didn’t.

Nezha has been revered in Chinese folk religion for centuries as a protection deity. Gamblers ask him for guidance, particularly with the lottery, because people believe he reveals winning numbers.

He shows up in movies and video games because of his mischievous character. Ne Zha, a 2019 animated movie, is currently on streaming platforms.

Did you know there is a movie series from the late 80s – early 90s called God of Gamblers? No, it has nothing to do with Greek mythology. It’s a Hong Kong saga starring Chow Yun-Fat (Crouching Tiger Hidden Dragon) as Ko Chun (a.k.a Chocolate), a world-renowned gambler.

He is famously talented at playing games of chance, including 5-card stud poker, mahjong, and dice games. He becomes known as the “God of Gamblers.” The film series has three main movies and multiple related titles and spin-offs.

You can find several slot games based on Greek gods and mythology. Check out these popular real money online slots and spin for lucky wins!

Call Upon the Power of the Gods in Tower of Fortuna

Play one of the best online slots for free below. Can you unleash the power of the deities and reveal massive wins?

Try Your Luck and Play for Real Money

Take a look at why these online slots made our list and what makes them so special. You can find these games at some of our top-rated online casinos.

It only seems right to hang out with the Fates when you have anything at risk, at least until you can fully explain runs of luck. After exploring games like these, we can say that the realm of the gambling gods is as good a place as any to seek out slot riches.

The online casinos where you find these games are the most reliable, secure, and easy to use anywhere. Are the gods on your side today? Sign up at our recommended casino sites and spin to find out!